“Far From the Haunts of Busy World”

So goes the prophetic inscription on the stone of Barbara MacKay.  When the cemetery was being actively used, numerous farms surrounded the site and the nearby road was the main route between East Earltown and Clydesdale community.   Today it is indeed far removed, most days, from any human contact.

The first homestead in Earltown borders the lower end of this cemetery.  It was settled in 1813 by Donald MacIntosh of Rogart.  He was joined by Angus Sutherland the same year and by Donald Cameron and Alex Baillie a couple of years later.  The latter were veterans of the Peninsular War and named the new settlement New Portugal.  The immediate neighbourhood was named Spain, in jest, as the two old soldiers retold their adventures in Spain at every opportunity.  Although recognized as New Portugal for a few years, Earltown was bestowed upon the district by the governor of the day.

This quaint setting was established  before 1826 to serve the settlements in the eastern fringe of newly settled Earltown.  The first known burial was of Christy Sutherland, the first wife of Thomas MacKay,  Berrichon Road.   The cemetery takes its name from the Gunn family who later settled  to the west of this site.  It has also been known as “Pentioner’s Cemetery” after Donald MacKay, a war pentioner, and the Spain graveyard, a reference to the unofficial name of the vacant settlement below the cemetery.

After 1840, most people took lots in main cemetery in Earltown village or the then new cemetery beside the church.  Those whose ancestors are buried here continued to use the cemetery until shortly after 1900.  One of the last burials was of Janet MacKay Gunn in 1908 at the age of 100.

For the last century, the cemetery was kept clear and in repair by members of the community without funds or an organization.  An association was formed in 2018 to ensure continued maintenance and preservation of this historic spot.

(1 ) Donald MacKay ‘Pentioner” was a native of Lairg, Sutherland.  He spent several years in the army and lost an arm in the Battle of New Orleans.   He was a patient in the Chelsea Hospital and was a Chelsea Pentioner, hence the family nickname.  After his discharge, he became a shepherd in the far north where he met Barbara MacKay of the parish of Farr.  They lived in several locations working as shepherds before emigrating in 1836.   A brother Duncan preceded them to Pictou and settled at Blue Mountain.  Donald first acquired land in College Grant but not liking the uninteresting terrain, opted to settle at the top of Squire William MacKay Road through which this access road travels.

The impressive stone was fashioned in the United States and brought to Denmark by train.  From there it was drug by several beasts on a sledge to its final resting place.

(2) George Graham was born on the high seas when his parents were emigrating from Clyne, Sutherland, to Nova Scotia in 1820.  George was raised in Central Earltown and acquired a farm on the county line at College Grant when he married Elizabeth MacKay, daughter of Thomas and Margaret.  Elizabeth’s grandparents were his neighbours while growing up.   Their descendants moved to the west coast.

(4) Hugh Gunn and Janet MacKay began their married life in Strath Halladale on the Sutherland – Caithness border.  They came to Nova Scotia in 1831 along with Hugh’s parents and siblings.  The first home was at Middle River before acquiring the surrounding farm ca. 1836.   Hugh’s parents and one brother, Alex, lived near Earltown Lake.  A brother William lived at West Earltown and a sister, Barbara MacLeod, lived at The Falls.  Hugh and Janet had   children.  Their youngest son Dan was the last of the family to live on the nearby farm.

(5)  Children of Hugh and Janet Gunn

(6)  William Gunn lived to the right after you leave the cemetery.  He was a son of Hugh and Janet.  His wife, Esther, was a daughter of Donald MacDonald and Esther Sinclair, (9).  William’s family moved to Brule.

(7) Thomas MacKay was born in Kildonan, Sutherland, and lived in Scottary, Clyne while growing up.  His parents, Peter MacKay and Betsy Ferguson, ran a grist mill on Strathbrora, Clyne.  In 1813 the family were among the first to leave Clyne to start a new life in Nova Scotia.  They settled at Braeshore.  A short time thereafter, Thomas received a grant in his own right extending along the West Branch end of the Berrichan Road.   His first wife, Christy Sutherland, was one of the early burials in this cemetery.  His second wife was Margaret MacKay “MacIubh”, daughter of John Mackay and Mary Sutherland, Rogart and Earltown. There is no burial record for Margaret. There were four children to Christy and seven to Margaret.  Most of the family lived at West Branch.

(9) Donald MacDonald was born in Caithness and was once employed as a coachman for the Earl of Caithness.  His wife Esther, according to a long standing tradition, was a daughter of the Earl. This has yet to be firmly established but various things suggest that she was from a higher caste than Donald.  The couple and their older children arrived at East Earltown in 1817/1818 and settled  to the north of this site.  Esther died in 1829  leaving Donald with  9 children.  Donald, known as Squire MacDonald, amassed a sizable estate.  Some say it came in the form of support from his Sinclair inlaws.

(10) Donald MacDonald II, continued on his father’s farm.  His wife, Betsy Matheson, was born in Rogart and came to Earltown much later with her mother, stepfather and siblings.  Her family settled in Upper Kemptown.  Donald and Betsy had ten  children including  Mary Jane and Donald III.   Donald III was known as Big Donald or the Bear and was the last of the family to live at East Earltown.  He was found dead in his house supposedly of a virus. The men of the community gather on a cool night after dark  to bury his remains.  A poem was written to commemorate this unusual burial. Descendants of this family group lived throughout West Pictou, Winnipeg, Washington State,

(11)   No stone.   Alexander Baillie and Janet Baillie.  This couple are buried in the lower corner of the cemetery without a marker.  Alexander was a veteran of the Peninsular War.  Alex and Janet lived at Tollistar, Clyne before emigrating ca 1815.  They settled on a farm straddling the county line on the Clydesdale Road.  They had a least nine children who settled in various parts of Earltown and West Branch.  Alex death date is unknown but Janet’s was October 30, 1844.

(12) William Baillie, son of Alexander, was known as Quilly.  He would fashion needles for weaving out of porcupine quills.  William and his wife, Helen Sutherland “Buidh” , lived on a road between the Clydesdale and Berrichan.  Their family of nine lived in various parts of Earltown, West Branch and Londonderry.

( 13) John Baillie, son of Alexander, was known as Johnny Poga.  Poga was gaelic for the sack he would carry travelling the roads looking for day labour.  He was married to Sally MacIntosh of Scotsburn.  They had four children including Elizabeth Mollison who once lived in Portland, Maine and is buried here.

(14) Alexander MacBain was a native of the Parish of Moy, Inverness-shire.  He came to Pictou around  1818  and by one account settled at Pictou Landing and by another tradition at Durham. Not finding the area to his liking he applied for and received a substantial grant of the low lying area of East Earltown.   It would seem that he lost his first wife in Scotland leaving him with a daughter, later Mrs. Donald Ross.  His second wife, Jane MacIntosh, was the mother of seven more children.

(15 ) Duncan MacBain, son of Alexander MacBain, lived on the back part his father’s grant near College Grant.  His wife Helen Rose was from Scotsburn.  The family moved to MacBain Road, Meadowville leaving their son Isaac on the local property.  They had seven children in total.

(16) John Munro was from Wallace, Nova Scotia, and was married to Nancy MacBain, daughter of Alexander.  They owned the farm directly opposite the start of the Squire William MacKay Road.  They had four children.  They were known as the “Clinkie” Munroes, Clinkie being a reference to their trade in stone masonry. The only known descendants lived in Winnipeg.

(17)  Alexander Munro, one of four children of John Munro and Nancy MacBain. 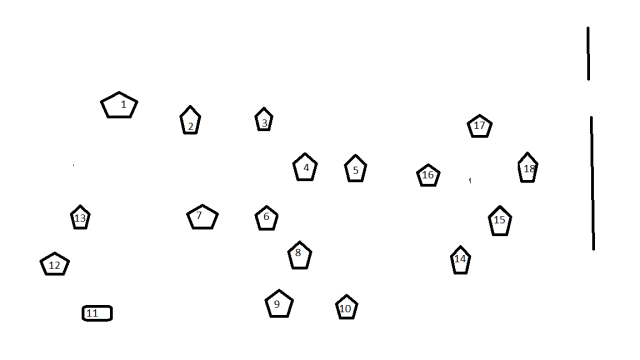